It’s Halloween time, and what can be better than creepy stories, haunted properties, and mysterious trails.  During this month you’ll can read a series of creepy stories.

Many times when one thinks of a “cursed” and “Connecticut” the mind immediately goes to lonely, abandoned places like Dudleytown, allegedly a site of much suffering. Rarely does a location steeped in wealth, affluence and luxury seem capable of bringing doom and woe to those who live there, but such is the case of Dunnellen Hall.

Haunted lighthouses and mansions – the perfect recipe for a gripping read, a scary movie, or a weekend visit to Fairfield County. However, some of the strangest places are now off limits to curious visitors. The Fairfield State Hospital formerly housed criminally insane patients from 1931 until closing in 1995. And Easton’s Union Cemetery is said to be haunted by a “White Lady.”

Built atop a hill in 1918 overlooking 26 acres of the most expensive real estate in Connecticut this 28-room Jacobean mansion has over 21,000 square feet of living space as well as a marble reflecting pool, a 52-foot indoor pool/winter garden and it seemingly has brought bad fortune to almost everyone who has owned it.

Originally completed for a mere $1 million by Daniel Grey Reid, it was a gift to his daughter and her family who lived there until 1950 without incident. It was then sold to steel magnate Loring Washburn, who was the first to experience bad luck as his financial empire quickly dissipated after he took possession of the property. By 1963, he was in complete ruin, so the property was taken from him and sat vacant for a few years.

It was then bought by former showgirl Gregg Sherwood Dodge Moran in 1966, who sold it two years later to financier Jack R. Dick. Some like to connect Moran to the curse as her ex-husband eventually would shoot himself in the head a decade later. 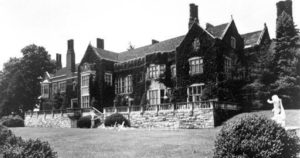 Three years later, Dick was indicted by a grand jury for shady financial dealings and died in 1974 before his case went to trial.

The next owner was Ravi Tikkoo, who before the purchase had made his fortune in oil supertankers; less than a decade later, he had also gone bust, forcing him to sell the property to the current owners: Harry and Leona Helmsley

The Helmsleys purchased it in 1983 for $11 million as a summer home. It was the subsequent renovation work at Dunnellen Hall — and the ensuing charges of tax evasion and eventual criminal trials — which began the Helmsley’s decline which included Harry’s death and Leona’s 18-month stretch in the slammer. After serving her sentence, Leona moved in year-round, living there until her death in August 2007. 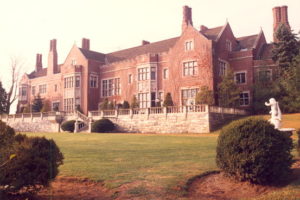 Dunnellen Hall was sold in October 2010 for $35 million, but after some brief renovations and less than a year, it is currently back on the market, recently marked down — if you have the cash and you’re not afraid of curses or potential financial ruin, it can be yours for a cool $42.9 million.

We are pledged to the letter and spirit of U.S. policy for the achievement of equal housing opportunity throughout the Nation. See Equal Housing Opportunity Statement for more information.

Please fill out this form and we will direct your message to the appropriate person.